For 12 months from May 1993 until May 1994 I was deployed to the United Nations Protection Force (UNPROFOR) Headquarters in Zagreb, Croatia as part of a newly constituted terrain analysis team. The team of one Warrant Officer and a Sergeant was supplied by the Mapping and Charting Establishment (MCE) in Ottawa. I was the exception as at the time I was a Sgt stationed with the 1 Intelligence Company (1 Int Coy) which was part of the 1st Canadian Division Headquarters in CFB Kingston. Since I was the first person of the team to arrive in Croatia this in essence made me the first non-commissioned member of MCE to deploy on an operational mission since the early 1970s when at that time a pair of MCE surveyors had been sent to survey some boundary lines in the Golan Heights.

The task of our team was to know, understand and report on the terrain as it impacted on humanitarian and military operations. To accomplish this task we had ‘carte-blanche’ to travel to just about any area of the Former Yugoslavia; which meant that we got to see and experience a lot of the country during the year that we were in theatre.

Upon arrival in Croatia we were issued some unique clothing and equipment that was at that time not on issue in Canada. One item was the UN blue painted American manufactured Personnel Armour System for Ground Troops (PASGT) helmet. The PASGT system consisted of both Kevlar body armour and a helmet and these two items had been in use by the American military since the early 1980s. It was during the early 1990s that Canada was transitioning from using American manufactured steel M1 helmets, some of which were from an initial 1942 purchase, to a more modern ballistic Kevlar helmet. The US PASGT was just one type of ballistic helmet that Canada was trialing and employing at the time. Eventually by the late 1990s Canada would settle on the French designed Gallet CG634 helmet, but at the time the two battlegroups in Croatia and Bosnia were being issued with the US PASGT. 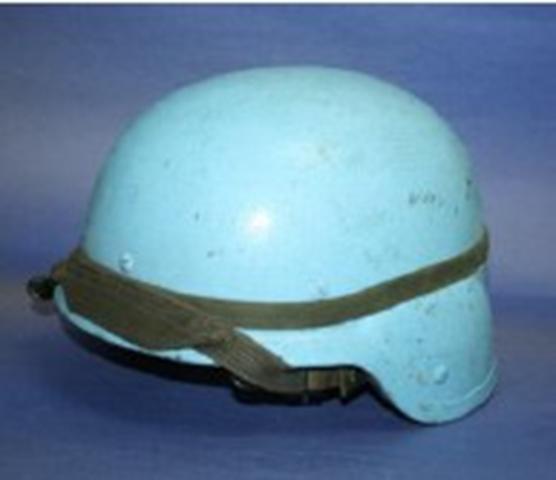 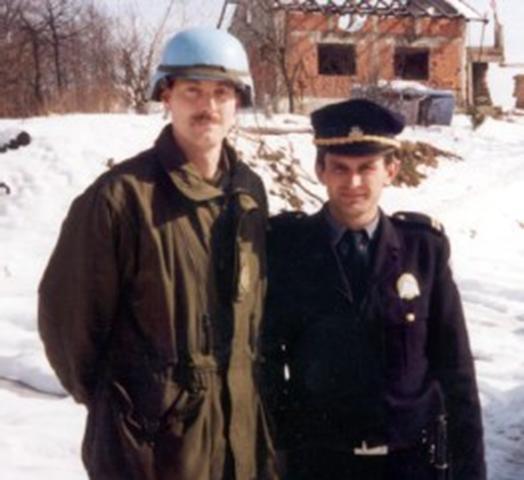 The photograph shows me with a Croatian Ministry of the Interior police officer Ministarstvo unutarmjih poslova (MUP) during a tour of the confrontation line which in the spring of 1994 was situated along the Sava River just east of Zagreb.