Some pins were elaborately made using precious metals and gemstones, while others were made more simply. It really didn’t matter – the sharing of love in sending a sweetheart pin was the same regardless of the metal or manner used in its creation.  Canadian serving members were not alone in sending the pins to their loved ones; the pins were popular within the serving ranks of other countries as well.I shared my fascination with sweetheart pins and my hope to start collecting the pins someday in the future with a colleague. This co-worker very generously purchased a sweetheart pin and gave it to me at the office one day not too long after our chat.  It was a lovely blue pin with the Canadian Forces Engineers symbol on it. I wish I knew the history behind it and the serviceman who gave this pin to his sweetheart.  But I knew that was impossible.A very good friend, retired Brigadier General Peter Holt was an Engineer in the Canadian Forces and was the organizer of the Canadian Forces marching teams participating in the Annual International Four Day Marches in Nijmegen. During the march they pass the graves of fallen Canadian soldiers at the Groesbeek Canadian military cemetery opened on 5 May 1947 by Queen Wilhemina, then reigning queen of the Netherlands.  There are many young Canadian soldiers buried there who gave their lives for the liberation of the Netherlands.

My mind hatched a plan.  I spoke to Peter asking if he was going to the march in the summer of 2013. Although he would not be attending the event that year, I shared my plan for the pin and Peter’s reply was ‘leave it with him’.

In the fall of 2013 I received an email from Brigadier General P. Holt with the photo below. It was a picture of a group of Canadian Army Engineers in Groesbeek at the Canadian military cemetery. After the ceremonial gathering commemorating their World War II comrades was completed, these soldiers searched for and found a specific grave; one belonging to a Canadian Forces Engineer.  The photo is of this group of soldiers standing by a grave on which they had respectfully laid their poppies and had also gently tucked the Sweetheart pin (the one I entrusted to Brig. General Holt) in a safe place at the gravesite of a Canadian Forces Engineer. 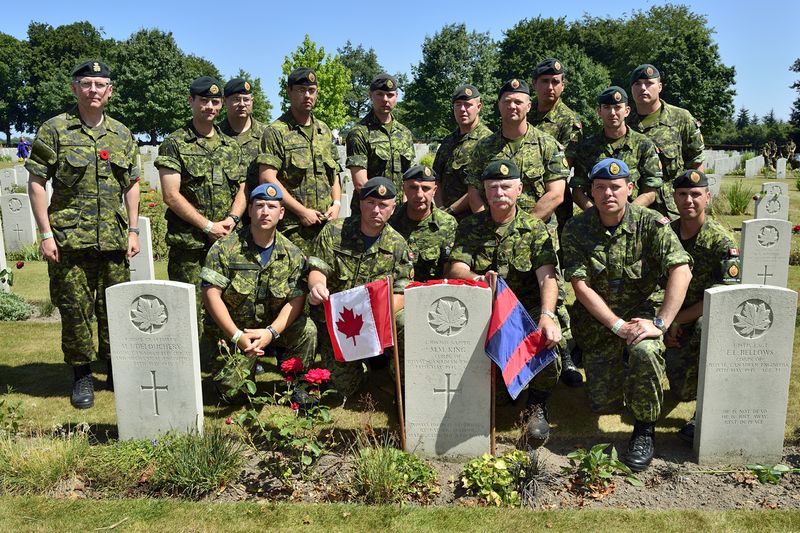 This soldier is ‘my’ wartime Sweetheart, Morley King who was killed at age 23 on May 24th 1945. He was a Royal Canadian Engineer and he was part of the 2 Pile Driving Platoon. Morley King was from Fleming, Saskatchewan.

Someday I will visit Morley just to check on him and say hello. I want to say “Thank you, Morley King, for your great sacrifice”.