In this picture, he is sitting on a Triumph motorcycle, but he always said that he preferred the Indian machine.

During the war, Nelson Farrell served in a number of capacities, other than pure signals work. In the Battle of Vimy Ridge, he was the driver of a battery commander of 9.2 inch howitzers and observed the whole battle from the battery commander’s OP. 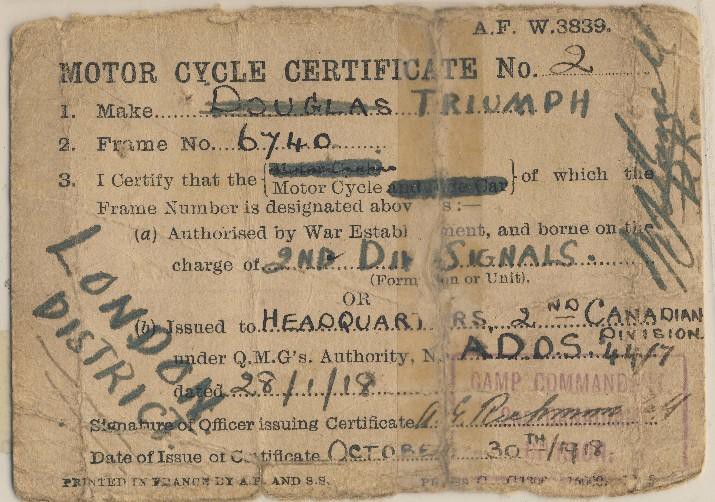 On leave in England, he was visiting the family of an old family friend from Winnipeg, WO1 Smith. At that time WO1 Smith’s wife and daughter Elsie were living in Folkestone. During his visit, Folkestone was bombed by Zeppelins, one of the first strategic air raids in history. The idea of aerial bombing was so new that there were no anti-aircraft guns defending the town, and the guns of the warships in harbour could not elevate high enough to engage the Zeppelins. My father took part in the rescue of civilians who were injured and trapped by falling buildings.

He remained with the Second Division till the end of the war, and was present,  just out of the photo, at the famous march past of the victorious Canadians, after the relief of Mons.

After the end of the war, many of the Canadian Expeditionary Force were housed at the Canadian camp at Kinmel Park in north-eastern Wales.  A combination of poor food, long delays in arranging return transportation to Canada, incompetent administration and local profiteering at the expense of the Canadian troops, led to riots in the camp.   Five Canadians were killed and 28 wounded.  This event finally galvanized the government to speed up the return of these troops.  The RMS Olympic, a sister ship of the famous Titanic, was in dry dock being refitted for civilian service.  Only partially repainted from its wartime camouflage, she was put back in service and loaded with Canadians for Halifax.

Nelson was one of the soldiers returning on the Olympic, arriving in Halifax in June 1919, more than six months after the Armistice.

All through the crossing, he kept his two kit bags close to him.  One contained his uniforms and personal weapon – a long-barrelled revolver.  The other was chock full of war souvenirs.  Among them was a model of the Mark 5 tank which he had made from a brass shell casing and mounted on a piece of the altar rail of the ruined Arras Cathedral.  The kit bag also contained a Prussian leather helmet with a spike on top, a German cavalry carbine, a Belgian miniature automatic and numerous other items.  When the Olympic was coming into her berth in Halifax, she struck the pier hard.  Along with many others, my Father rushed to the side to see what had happened.  When he returned a minute later, his kit bag with the war souvenirs was gone!

Eventually, he reached his home in Winnipeg, and found that his dog, Spot was still alive – blind and crippled, but he still knew his master.