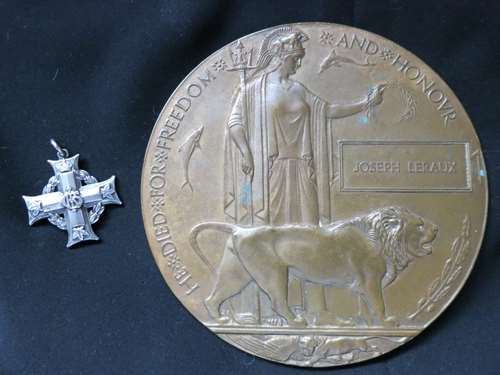 My aunt pointed out to me that Joseph’s family name was incorrectly spelled “LERAUX” instead of “LEROUX” on his medal, on the letter from the King, and on his headstone.  My search online brought me to the Commonwealth War Graves Commission web site.  I informed them of the error so that they could correct their files.  To my surprise, a couple of months later I received an email from the Commission office, containing a photo of the headstone with the correct spelling of his name.  My aunt and I were thrilled that they had done this without our asking.  I also informed the Department of Veterans Affairs of the error in my great-uncle’s name in “The Book of Remembrance” and they corrected the family name.  Of course it would be impossible to have the name corrected on the other items, i.e. the bronze plaque and the letter from the King, but the more visible artifacts had been corrected.

I am now the owner of Joseph Leroux’s cross, the bronze plaque and the letter signed by King George V which I keep preciously.  I have also continued my aunt’s tradition of displaying his military artifacts every November 11.

This is the (short) military story of Joseph Leroux:

On March 31, 1916 at the age of 28, my great-uncle Joseph Leroux born in Bourget, Ontario, travelled to Montreal to enlist and become a First World War soldier in the CEF.  He was assigned to the 163rd battalion, a mainly French speaking unit originally “Les Fusilliers de Sherbrooke, Montréal”.  He did his army training in Bermuda until November then sailed to England and disembarked in December of 1916.  He was sent to France on May 18, 1917 and was taken on strength of the 22nd battalion (a.k.a. the Van Doos).  Unfortunately, a few weeks later on 7 July 1917, he was killed in action in the field.  He is buried in the Van Loos British Commonwealth Cemetery, France. 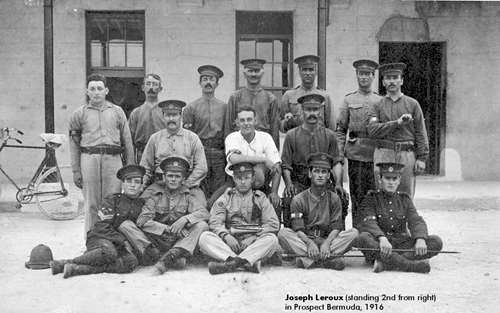 Although I did not get to know my great-uncle Joseph, I hope to visit his grave in France one day to pay my respects for the sacrifice he did for our country.