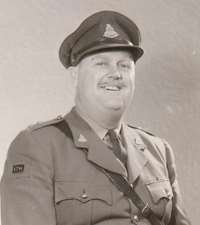 Howard Michael Street was born in 1917 in Montreal and raised there. After graduation from Loyola College High School in 1937 he went to work in Toronto. In March 1939 he enlisted in the Queen’s York Rangers (1st American) militia regiment as a private and attended the annual camp at Niagara, where he was promoted to Lance Corporal. He tried out for the Toronto Argonauts football team in the summer of 1939 but was not successful.

When WWII broke out in September 1939 he volunteered for the regular Canadian army and was commissioned as a 2nd Lieutenant on October 13, 1939. Following training at Camp Borden he joined the staff of the Canadian Small Arms Training Centre at Long Branch, Ontario and was subsequently promoted to Lieutenant (Infantry, M.G.) on 17 October, 1941. He was posted to the Canadian Armored Corps Reinforcement Unit and in the first week of May 1942 sailed for England on the SS Letitia, serving as Provost Marshall of the ship during the voyage.

On August 15, 1942 he joined the 17th Duke of York’s Royal Canadian Hussars (7th Reconnaissance Regiment) of the 3rd Canadian Division – a Montreal regiment – and trained in England until July 1944. Although elements of the 17th took part in D-Day operations, he landed in France with the majority of the regiment in early July. On 23 July 1944 he was seriously wounded in the village of Tilly-la-Campagne, near Caen. After lifesaving surgery in British and Canadian medical facilities in France he was transferred to the 23rd Canadian General Hospital in England for further treatment. On 8 December, 1944 he arrived back at Pier 21 in Halifax as a patient aboard the same Letitia, which was then serving as a Canadian Hospital Ship. His parents had been advised of his return in a letter dated 27 November 1944.

After his return to Montreal and recovery from his wounds he enjoyed a long career with Hewitt Equipment Ltd. He was active in the 17th Duke of York’s Royal Canadian Hussars Veteran’s Association and Royal Canadian Legion Post 175. He and his wife Tenny had six children. He passed away in Montreal in March 1987.