The medallion was familiarly known as a “dead man’s penny”.  Five inches in diameter, cast in bronze with an image of Britannia standing with a lion, it came by its name because it was similar in appearance to the much smaller penny coin of the time. My family’s “Dead Man’s Penny”  is one of 1,335,000 memorial plaques issued after the First World War to the next of kin of all British and Empire service personnel who died in service during the war.

Properly called a memorial plaque, the medallion has the name Patrick Augustine Coady in cast, raised letters in a rectangular tablet below Britannia’s outstretched left hand.

Gus Coady was my uncle.  He was born June 14, 1894 on the family farm in North Wiltshire, PEI.  Growing up, he and his younger brother, my father, entertained themselves by exchanging messages in Morse Code, one of them from their bedroom and the other from the loft of the barn.  The childhood amusement served both of them well, securing Gus a position as telegrapher for the CNR in Summerside until he was conscripted in late 1917, and my father a post-war position as a CNR station agent in Saskatchewan.

Gus sailed for Britain in the Spring of 1918, as a member of the Canadian Infantry, 17th Reserve (N.S.). He had just been released from hospital and still had a fever.  On arrival in Britain, he was placed in the Bramshott Military Hospital where his condition worsened.

My father, who had been exempt from service because of the need for farm workers was, nonetheless, conscripted shortly after Gus.  His ship arrived in Liverpool in late summer 1918 where it was quarantined. 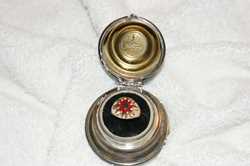 There, Dad learned that Gus was near death.  Dad was granted permission to visit his brother and was sent ashore, under escort, for that purpose.  He was at the bedside when Gus died.  He removed a ring from Gus’ little finger. Since all Gus’ possessions had to be sent to his official next of kin (my grandfather), my father surrendered the ring. It was returned to him back in Canada. The ring is now in my possession and is shown in the photograph with the Memorial Plaque.

Shortly after receiving notice of Gus’ death, my grandfather received a bill for an overcoat allegedly ordered by Gus before going overseas. Gus’ illness had prevented him from completing the purchase.  The merchant demanded payment.  My grandfather refused as a matter of principle. Taken to court, he won.  Having proved his point, he paused on the steps of the Summerside Courthouse.  With a great flourish he counted out the amount owing, handed it to the merchant and strode off to catch the next train back to Charlottetown.

Patrick Augustine Coady died 28 August 1918. He is buried “over there” in Grayshott cemetery.