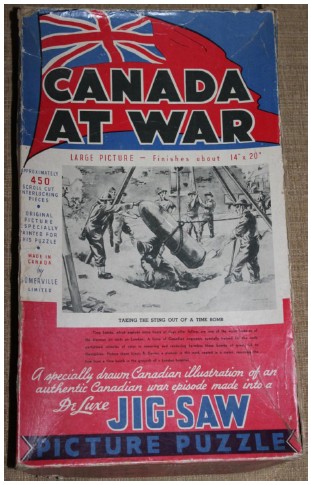 This Canada at War WW II puzzle is one in a series of 12 puzzles produced in Canada by Somerville. The 12 puzzle titles are:

3. The loss of the Margaree

6. Canadians do a Royal guard

7. Taking the sting out of a time bomb

9. Airmen in training fly over Canada

10. About to try their wings in the air

12. First class of airmen get their wings

This particular puzzle is titled “Taking the sting out of a time bomb”. The box describes the scene depicted in the puzzle: “Time bombs, which explode some hours or days after falling, are one of the worst features of the German air raids on London. A force of Canadian engineers, specially trained for the work, performed miracles of valor in removing and rendering harmless these bombs at great risk to themselves. The picture shows Lieut. R. Davies, a pioneer in this work, seated in a crater, removing the fuse from a time bomb in the grounds of a London hospital.”