Submitted by David Chapman, a member of the Society of Friends of the Royal Logistic Corps Museum, Princess Royal Barracks, Deepcut, England.

My father, Walter Chapman, was in the Royal Army Ordnance Corps (RAOC) during the war, having joined as a reservist in February 1939. He was commissioned in 1940 and was sent to North Africa. Towards the end of that campaign he achieved the rank of Major (in Tripoli – January 1943) and was transferred to X Corps (attached to US Fifth Army under General Mark Clark) in preparation for the Salerno landings in September of that year. In July 1944 he moved to AFHQ at Caserta Palace near Naples before re-joining 8th Army in Austria in 1945.

The photographs are of a Canadian soldier whose name I believe to be something like “Forsberg”, but I cannot be certain of that. (My father also referred to him by his nickname of “Canada” – not the most original!!). “Canada” was assigned as a driver to my father during the period of 1943/44 but I am unable to confirm the precise dates or the location of the pictures. My father thought highly of “Canada” and I wonder if these pictures might be of interest to researchers or possibly family members. 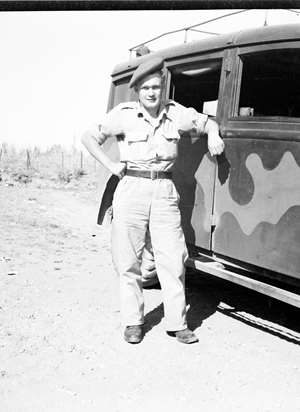